Skip to main content
Next Newer Post
Low/High Balloon Party--the Side by Side Comparison
Next Older Post
The Balloons Party from Festivities Magazine! Low Effort Version

A Balloon themed birthday party is bright, colorful, and fun for all ages!  Get ideas and inspiration for party decor, food, and balloon party activities at this festive balloon birthday party in a park. 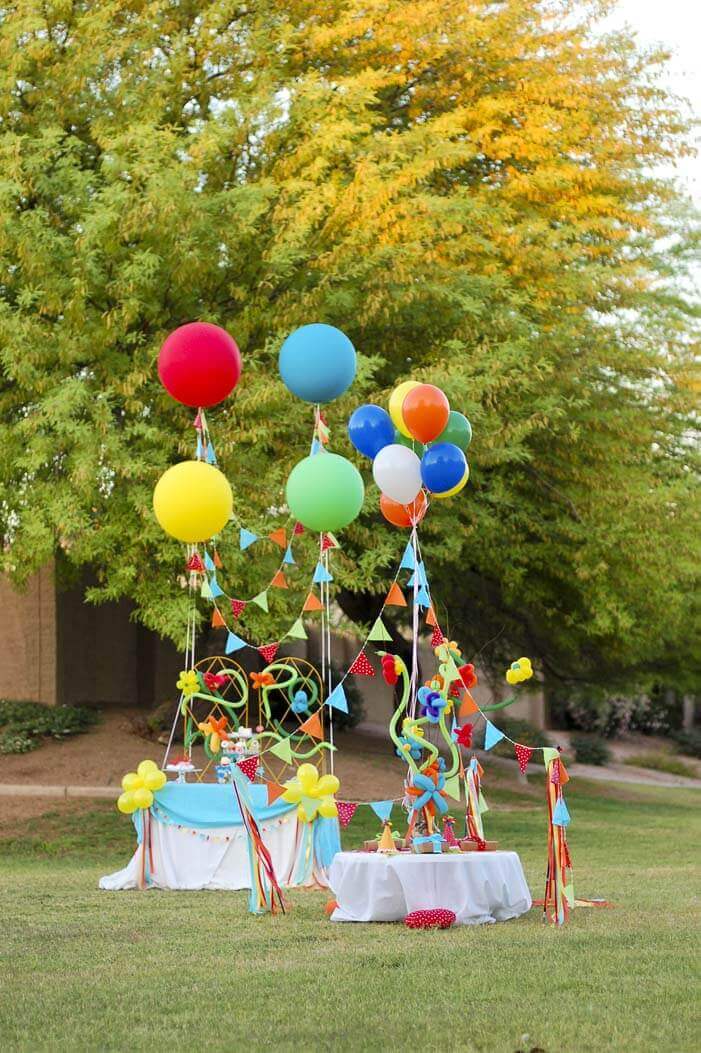 Yesterday I posted the low effort version of the Balloons party from Festivities magazine.  Today, it's all about same theme, same printables, same foods--but done in an over-the-top, high effort version!

I really don't think that putting together a high effort party is really about doing anything more difficult.  It's about doing more DIY projects, and layering more elements.

I wanted to really take advantage of being outdoors, and draw the eye up for the High Balloons party.  I positioned large round balloons (this time from Petite Party Studio) on the four corners of the dessert table, and draped fabric bunting from the balloons, creating a whimsical, lighter-than-air awning.

The same low, round table, cushions, and tablecloth were used.  But I created a sense of tented intamacy around the table with garden stakes, more bunting, and another bunch of balloons.  A grand twisted balloon flower centerpiece was easy to make, and was absolutely perfect for our party.

Simple ribbon bunting looked absolutely charming on the dessert table.  It's incredibly easy to make, and used materials I already had on hand for the ribbon tassels.  I love finding multiple ways to use the same materials or items!

the same ribbon bunting adorned the cupcake stand, too.

Simple balloon flowers and ribbon tassles dressed up the corners of the dessert table.  Such simple elements, but with such dramatic impact!

I love ribbon tassels.  If you buy the inexpensive, papery florist ribbon, it's very affordable, and brings in movement and color.  there's so much you can do with ribbon!

Ok, I admit, the twisted balloon flower backdrop and table centerpiece look intimidating.  But it's really very easy to do these simple shapes yourself.  One evening with a bag of balloons and YouTube tutorials and I had the skills to dazzle and delight my kids.  But if you're intimidated by the thought of undertaking such a task, search for balloon twisters in your community.  I can do enough to impress my kids, but there are plenty of people who are truly artists working with balloons.

A word of caution when working with balloons outside:  don't let them touch the grass!  I had about twice the balloons for the dessert table backdrop when we got to the park.  I told my husband not to let them touch the grass, and as we were setting up, I heard *pop! popopopop!*, and turned around, where DH had a surprised look on his face and said, "Oh, you were really serious about that grass thing!"  Yep.  Especially with the sharp, rough grass we have here in Arizona!  Luckily, I had backups and could whip out some more, but if you're purchasing your twisted balloons from a vendor, take care of those twisted treasures!

The cupcakes were largely the same, but look at what a difference it made to swap out the lollipop stick for a curly candle?  It makes those darling printables from Frog Prince Paperie look even more like balloons ready to take off at any moment.  See?  I'm not talking about difficult stuff here.  Just adding those unique small touches.

Instead of pre-bought meringues, I made homemade meringues piped into cloud shapes for the high-effort party.

Our "bunches of balloons" floated above the clouds at this version of the party.

The table settings were pretty similar.  Same boxes, same hats.  I added the adorable striped paper straws with printable flags to the package, and added a little ric rac to my no-sew placemats.  Look at what a difference it makes!  An extra five minutes of effort with a glue gun (if that!), but the payoff is worth so much more.

I decided to use the bagels because one, I have a great bagel recipe, and two, I wanted the round shape that evoked the large round balloons used in the party decor.

Activities were similar for both parties.  Coloring again--but this time I wrapped the crayon boxes in some of the printables. 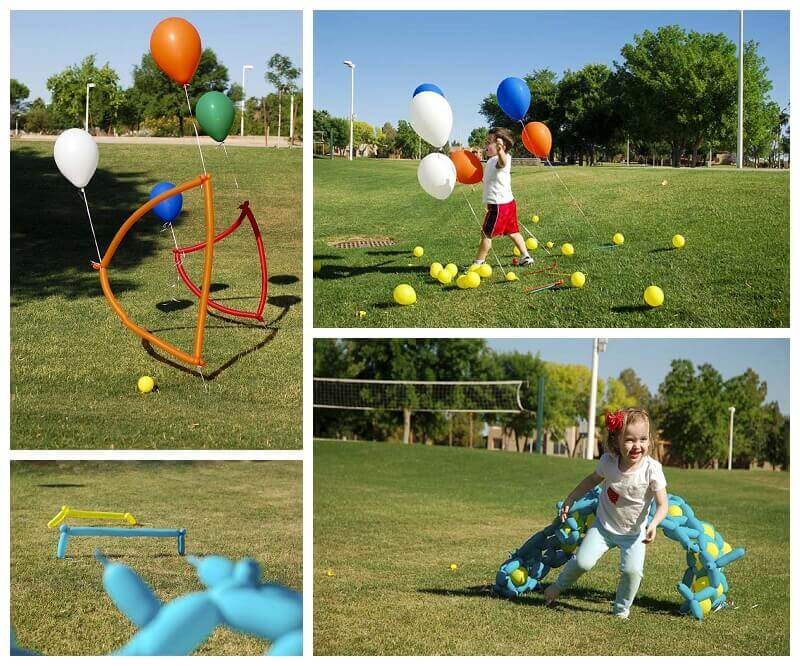 The main activity addition to the high-effort balloons party was a balloon obstacle course.  A balloon tunnel, balloon hurdles, a floating tunnel, and a balloon forest. 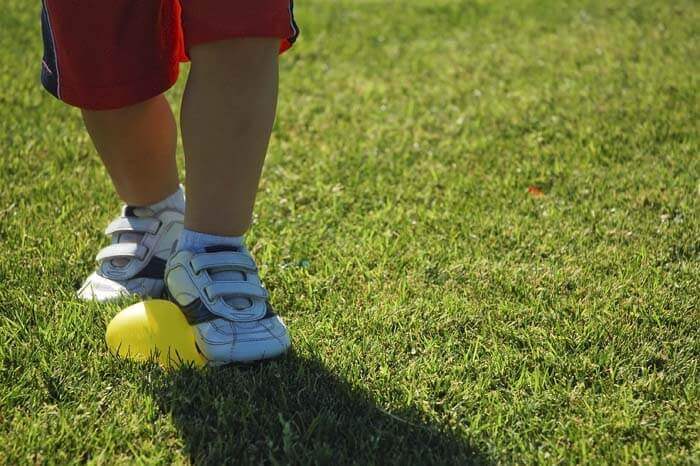 Sure, the kids loved the obstacle course, but do you know what their absolute favorite activity was?  Popping all the balloons!  What a great reminder that it's the simple joys that matter the most.

Next Newer Post
Low/High Balloon Party--the Side by Side Comparison
Next Older Post
The Balloons Party from Festivities Magazine! Low Effort Version