In yesterday's post, I showcased the dessert table for the Harry Potter Party my friend Paulette planned for her daughter, Mikayla. Today, I'm going to give you a glimpse of Paulette's party planning brilliance, and show you how incredibly fun and creative the party was.

The party was scheduled to run for four hours, and I have to say, we needed every minute of that time. There was so much to do, and the kids stayed occupied and delighted for every minute of the celebration, and left wanting more. Now that's an impressive testament to how well the party was planned!

Paulette created some amazing thematic centerpieces to decorate the tables and set the scene for the guests: 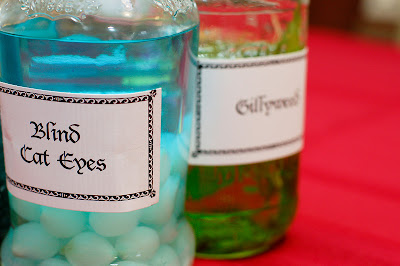 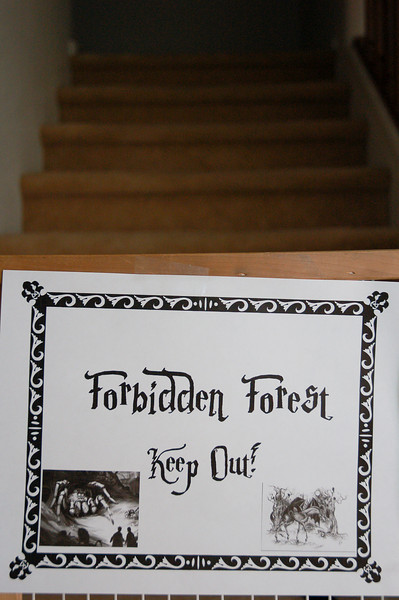 I always like having an activity for the kids to jump into at the beginning of the party, to occupy their attention while the rest of the guests are arriving. I'd stumbled across this tutorial for making charming felt owls, so I suggested that we have the kids make their own familiars. It was a bonus that I had tons of felt on hand and had bought way too manyStyrofoam ballsfor the Cornish Fairy Party. A few googlie eyes and some glue and we had the perfect craft project! 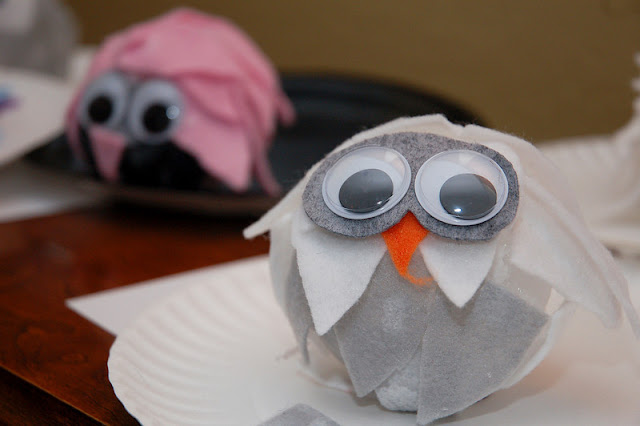 Once all the kids had arrived and finished making the craft, it was time for the party to start in earnest. Mikayla, the 11 year old birthday girl, had spent weeks carving wands for each guest. They were perfect, beautiful, and such a marvelous personal touch for her party! Paulette also created booklets for each child, with information about Hogwarts, potions recipes, and most importantly, their class schedules. It was a large party, so the guests were broken down into four groups, each with different class schedules, to keep them moving around to the different stations and entertained through the course of the party. 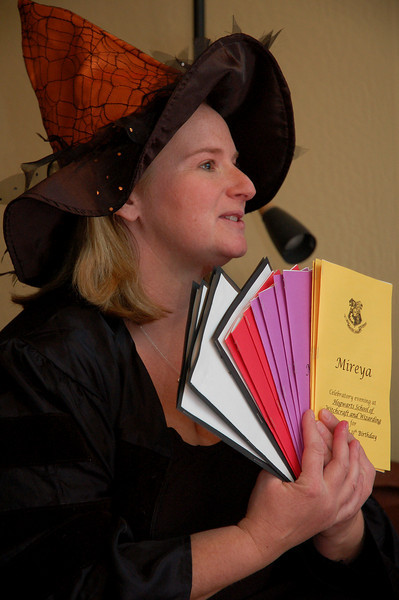 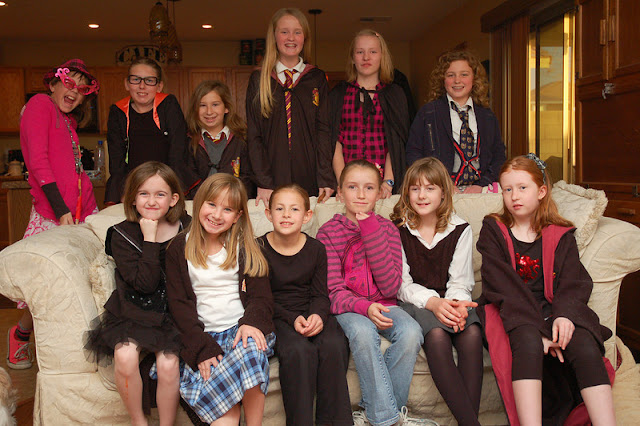 For the first class, everyone went together to Herbology. Rain threatened that night (I know! Here in Phoenix, can you imagine?), so we moved it into the garage. The girls planted basil seeds and decorated their pots with glitter paint. Doing this class first gave the pots plenty of drying time so they'd be ready to take home at the end of the evening. 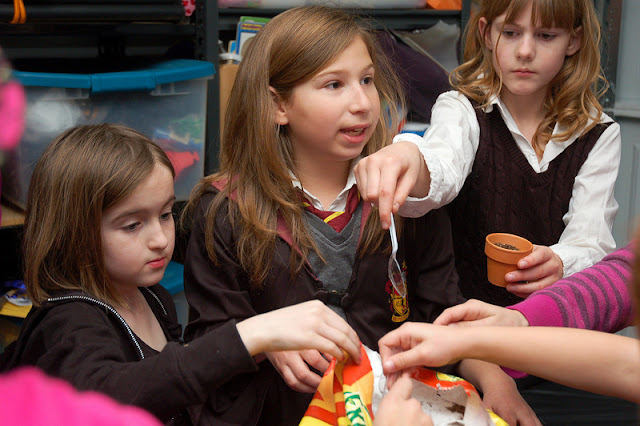 After Herbology, the kids broke down into their different groups, and followedseparateclass schedules.

They had Transmogrophy class--shrinky dinks!. Did you know you could buy sheets of plain shrinky dink material at the craft store? Neither did I, but I'm sure going to remember it! The girls loved makingkey chainsin this class. 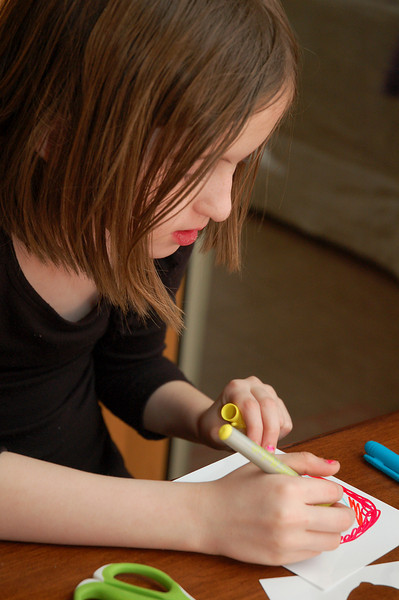 They also had Potions class, in which they followed potion recipes in their class booklets, and then had fun improvising their own mixtures: 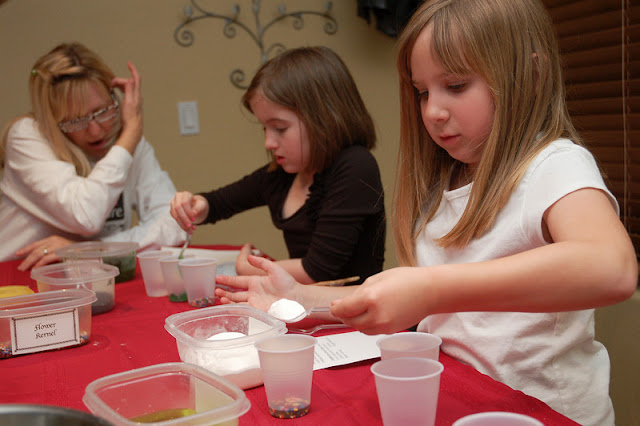 My favorite class had to be Divinations. It was just so fun, cool, and dramatic an activity. First, the kids were given a clear cup with ice and were told to concentrate on their futures: 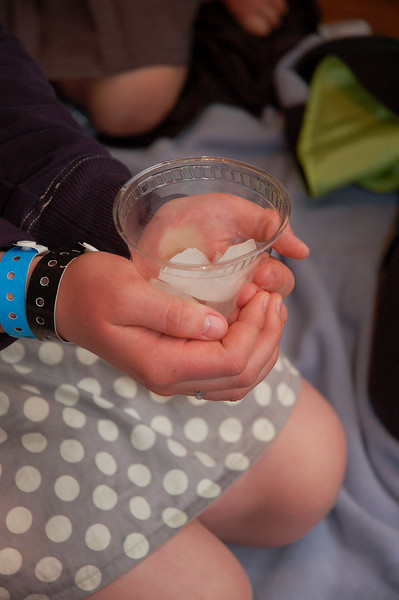 Then, Sprite was poured in each cup... 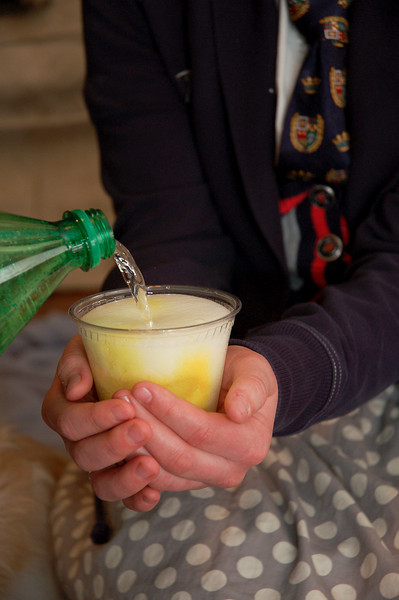 ...and the clear liquid magically turned a color, predicting the girl's future! 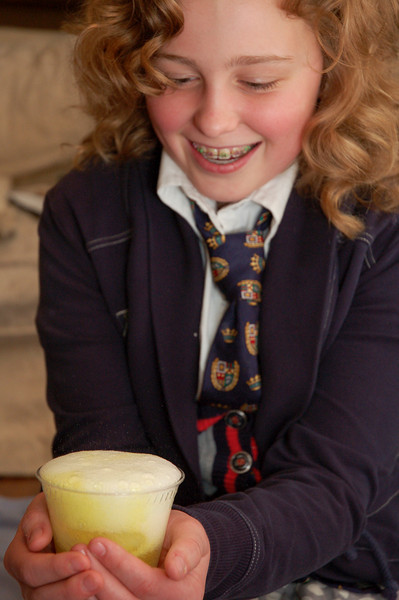 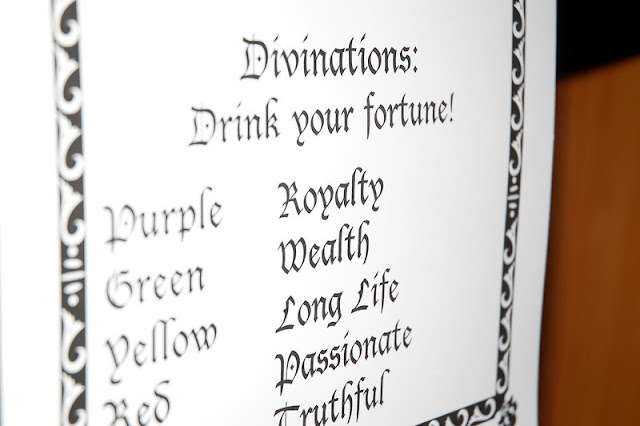 Look at the expressions on their faces! 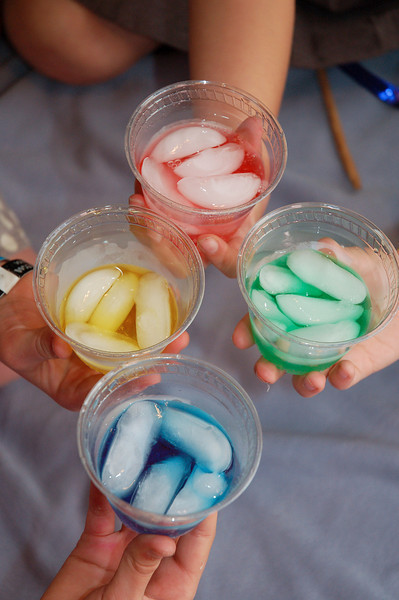 There was also a Defense Against the Dark Arts class, which, sadly, I didn't capture a very good picture of the entire party. But it was a huge hit, too! The girls went out on the back porch (dark! Hard to focus in extremely low light, even with my fastest glass.) and were each given a film canister. A half an Alka-Seltzer was put in each canister, and then the girls poured warm water in and snapped on the lid. The canister was quickly placed upside down on the ground, and a few seconds later, the pressure in the canister got so high that it popped apart and rocketed from the ground. Dramatic and easy! The kids begged to do it over and over. But no matter how many times they did it, between the dark and not knowing when the canister would go off, I never managed to get a picture of more than a fizzy contrail.

Cheezy Weasley pizza was served for dinner (with pepperoni stars cut out by the birthday girl), and of course we had a selection of punches. We served Butter Beer, Pumpkin Juice, and Polyjuice, and I got to use my favorite three-tiered punch dispenser. ;-) Of course my twinkling submersible beverage lights made anotherappearanceat this magical party.

Of course, the crowning event of the evening was the cake, complete with its trick candles: 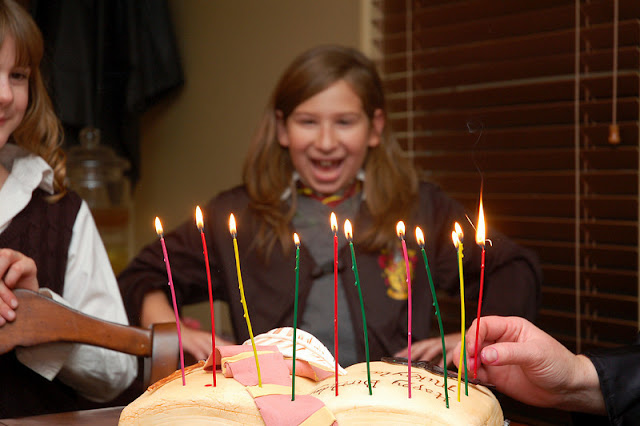 Congratulations, Paulette! You created an incredible party for your daughter, full of memories that will last a lifetime. Thanks for letting me have a small part in the fun!

LOVE! My daughter will be 8 soon but she has alre...

Thank you for sharing! I just have to use these id...

Wow this looks amazing! I will say it again: I wan...

That is WONDERFUL! I want a party like that!!

Such incredible detail! I am in love with every cr...

What a great party! We have a Harry Potter fan her...

Permalink Submitted by mrs_laura_koehler (not verified) on Sat, 10/18/2014 - 14:21
Next Newer Post
How to Make Green Troll Bogeys Chocolate Popcorn for a Harry Potter Party
Next Older Post
Real Parties: A Harry Potter Extravaganza--Part 1, the Dessert Table