How to Make Vinegar and Fruit Shrub (Drinking Vinegar)

Vinegar shrub is a sweet and tangy syrup made with fresh fruit, vinegar, and sugar.  It was invented as a way to preserve summer fruits for later use, and was popular in the colonial era in the United States, but it's having a bit of a comeback in trendy cocktail bars.  This type of shrub is often called Drinking Vinegar, because it's used to create flavorful, fruity, vibrant beverages (both alcoholic and non-alcoholic). 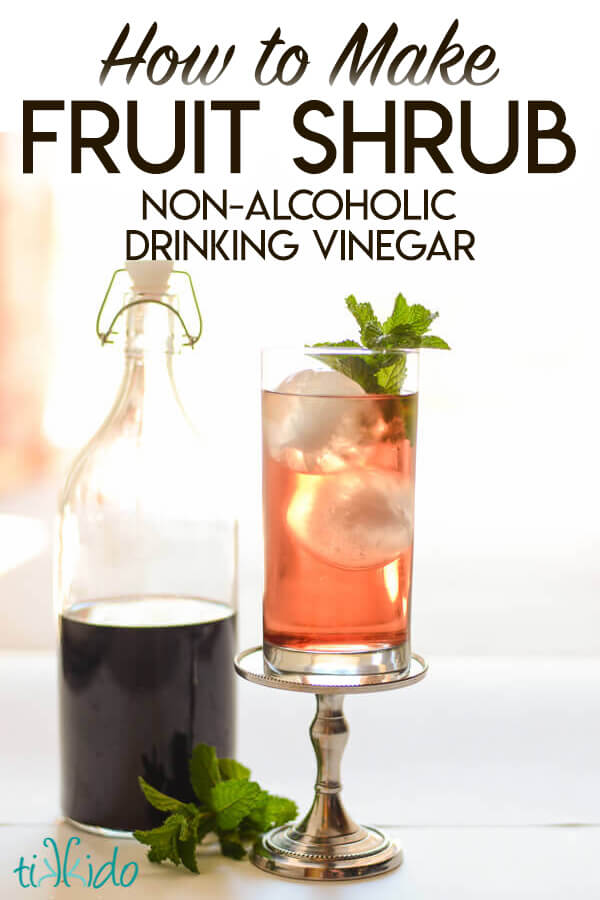 Until a few months ago, I only knew of shrub as the herby, sweet, complex alcoholic cordial made by Phillips of Bristol in the U.K.  Mixed with rum (in a cleverly named drink called the Rum and Shrub), it's a regional favorite in Cornwall--and pretty much just in Cornwall.  It's a good thing we're heading back there this October, because as you can see, we're nearly out.

But it turns out that there's another definition to "shrub" (well, besides the generic term for a plant gracing front lawns everywhere).  It's a mixture of fruit, sugar, and vinegar, macerated and steeped and strained.  As soon as I learned about the "drinking vinegar" fruit version of shrub, I simply had to try it.  If you're looking for an alcoholic Cornish shrub recipe, I have one of those, too!

Cherries were a fabulous price at my local produce market, and I bought way more than my family ended up being able to eat in a reasonable time-frame.  Perfect shrub opportunity!  Making shrub, after all, was a way of preserving bountiful fruit before it went bad.

First, mix your fruit, sugar, and mint leaves in a bowl.

Pretty quickly the fruit will begin to macerate, releasing liquid and dissolving the sugar into a clear syrup.  Let this mixture sit, covered, at least a few hours, and preferably overnight.  The next day, using a spoon or a potato masher, smush the dickens out of the juicy, sweet fruit.  Don't think you're clever and use a blender, because while that does release all the juice very nicely, it makes it VERY difficult to strain properly and thoroughly later.  Oops.

Add the vinegar, cover, and let it sit for a week.  Stir once a day.

After a week has passed, strain out the solid bits of fruit, and you'll be left with a sweet and tangy, intensely flavorful syrup.

The syrup is strong, so start with a light hand when you're mixing your beverages.  Start with about 1 part shrub to 8 parts other (water, rum, sparkling water, whatever mixture your heart desires).

The shrub will last up to 6 months in the fridge in a sealed container like the one I used (bought very inexpensively at Ikea).

I also made strawberry rhubarb shrub at the same time.  I was going to make straight rhubarb, but I had some strawberries past their prime, and figured I would throw them in, too.  Even though I'm typically anti strawberry-rhubarb combos, since they're not in season at the same time, and I think strawberries have no place in glorious rhubarb pies.

It did make the prettiest pink syrup concentrate, though, which made the most lovely blush beverages.

The strawberry rhubarb shrub, mixed with some tequila and sparkling water, makes pretty much the most perfect summer cocktail ever.  Just so you know.

I know, I know, "drinking vinegar" just doesn't sound that enticing.  But it really is so good.  Give shrub a chance.