Do you know the secret to the best, most tender, flaky pie crust?  It's vodka!  Yes, vodka.  I know it sounds strange, but I promise once you try this vodka pie crust recipe you'll be a convert.

When making pie crust, you have to be very careful to treat the dough very gently so you don't over-develop the gluten and end up with a tough, overworked pie crust.  I've always used cold butter and ice water to make my pie crust, because the cold helps to prevent development of gluten strands.

Why use Vodka in Pie Crust?

The reason the vodka is a brilliant addition to pie crust is because flour requires water to develop gluten.  If you replace some of the water with vodka, not as much gluten can develop.

I know.  Mind blowing realization.  By simply swapping half of the water I use in my favorite pie recipe with vodka, I instantly started making much better, more tender pie crusts.  Yay, science!

How to Mix Pie Crust:

It takes care, even with the vodka inhibiting gluten production.  But it's not hard.

Mix all dry ingredients together.

Use a pastry cutter to mix the butter (or shortening) into the dry ingredients, working the mixture until the fat is in pea-sized chunks.

Add the liquid to the dry mixture just a Tablespoon or two at a time.  Use a fork to gently mix the ingredients together.  As lumps of dough start to form, I remove them from the bowl and set them to the side, so the already-formed dough doesn't accidently get worked more.

Just as with traditional pie crust dough, you want to work the dough as little as possible.  But I have to say that this dough is far more forgiving than dough made without vodka.  If you re-roll the scraps to make pie scrap cookies, you'll have a much more tender, enjoyable scrap cookie than you would if you hadn't used the vodka.

The alcohol bakes off in the oven, and the vodka leaves no flavor behind.  It's absolutely brilliant, and is my favorite baking tip.

Printable, one page version of the Best Pie Crust (with Vodka!) Recipe: 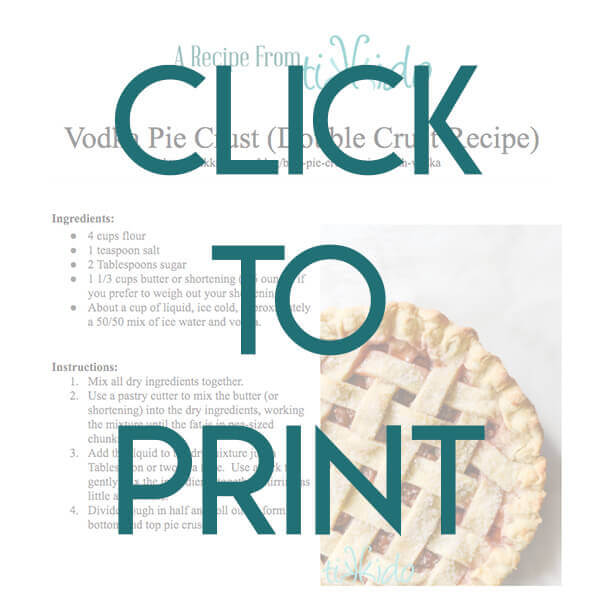 Excellent recipe! The pastry was perfect and easy to make.

I ran out of shortening so used 1/2 cup butter for the top crust and it was excellent.

I will definitely make this again.